The NYPD had planned to use a surveillance drone to monitor the annual party in Times Square for the first time.

But police chief Terence Monahan said the drone could not be safely deployed because of heavy rain and wind.

More than a million people celebrated new year at the Times Square event, which went without a hitch.

The NYPD had planned to use its camera drone in addition to deploying thousands of street cameras, officers and other security measures.

The drone was to be tethered to a building so that it could not fall on to the crowd below if something went wrong. 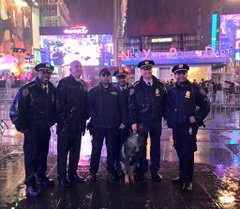 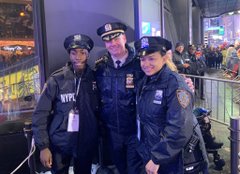 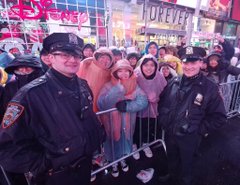 #HappyNewYear to all the cops who stood out in the rain and kept #TimesSquare safe, and to the thousands more still protecting New Yorkers in every borough tonight. Thank you for your service, and the sacrifices you make by being away from your families.

At a press event on 28 December, the force acknowledged that the aircraft might not work well in poor weather conditions.

Police used helicopters instead to keep an eye on the party from above.